The Bird Island covers an area of 600mu. The full-length of the wooden plank is 1,220m, and it is the area for collective rest and foraging of birds in the annual migration. At present, the common wide ducks in the Yellow River Estuary includes tadorna ferruginea, tadorna tadorna, anasplatyrhynchos, anas poecilorhyncha and so on. The largest population is more than 10,000.


Tadorna furruginea is a kind of red yellow duck, also known as yellow duck. They live in pairs in the breeding season, just as mandarin ducks. The male duck has a black neck ring, like wearing a black pearl necklace, and the wing feathers are white. When flying, there is an obvious copper green wing mirror. However, the female duck does not have the black neck ring. The feather on the head and neck are white, like the girls’face. If you see a pair of red ducks play together, they may in the breeding season. At usual, they live in big family or small groups. Yellow ducks are quick alert, which are difficult for people to get closer. They are mainly distributed in Eurasian continent. Now the total number is about 10,000 and it has been listed as the world’s endangered species.


Tadorna tadorna has white feathers with a few strips of bright dark lines. The duck derives its name from the red beak with a prominent red cortical tumor, resembling a cocked up mouth. It is highly alert, constantly stretches out the neck to look around. The telescopic neck looks like a zigzag in walking.


Anasplatyrhynchos is the green head wild duck, also known as green head, which is the most common wild duck and the ancestor of China’s domestic dock, with high nutrition value and medicinal value.


Anas poecilorhyncha is the wild duck with a yellow spot on the beak, which is good at diving and looks like domestic duck.


the first arrived pavilion is Guanniao Pavilion, where visitors can enjoy a variety of wild ducks. It is also a superior position for taking photos.


Standing in Guanniao Pavilion, you can enjoy the old course of the Yellow River and also view the vast landscape from different perspectives. Watching to the south by standing on the pavilion, the vast waters belong to the wetland restoration area of the natural reserve and the relevant laws prohibit human activities. As early as a few decades ago, the Yellow River ran into the sea from here and later changed the course by artificial diversion. Then the vast water was left. There are rich fish resources and it is the paradise of migratory birds. In their way of migration, some birds will settle here for food and restore strength. So it is actually the international airport and transfer station for birds. Therefore, Guanniao Pavilion is also the best place to watch the migratory birds in autumn and winter. 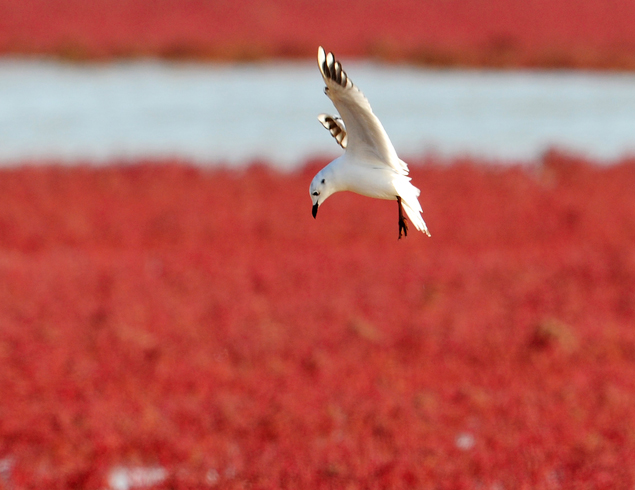